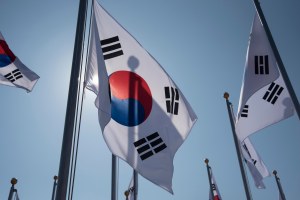 Similar to other historical events, it was the death of a leader which sparked pent-up anger among the Koreans and lead to the March First Movement; Emperor Gwangmoo was abdicated by the Japanese for sending a delegate to Hague and then, it is believed, was killed by poison at the Deoksu Palace during the Paris Peace Conference on January 22, 1919.

Following this, Korean students studying in Japan began plans for an independence movement. They formed an organization, the Korean Youth Independence Corps, and began to disseminate their plan globally. The organization held their first declaration of independence ceremony at the YMCA in Tokyo on February 8th, 1919 which became the detonator for the forthcoming March First Independence Movement.

The Independence Hall of Korea holds an annual reenactment of the March First Movement, and this year, I was able to attend. The event is wildly attended, as you can see in this picture.

As I watched a culture not my own swing Korean flags about with great pride, I couldn’t help but smile and be thankful that I was there as a witness. I saw only four foreigners (not Korean) at the event, excluding myself. 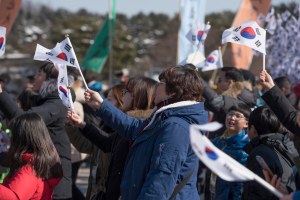 I began my day at the Hall by watching the reenactment of Japanese oppression of the Korean people. I must admit, I cried. Not because these were my people or because these reenactments were of my ancestors’ history, but because I could see the suffering through the movements of the actors and feel the despair in their howling pleas. I think whether experienced or not, we can all sympathize with human suffering.

Although I couldn’t understand the words spoken during the reenactment as it was all in Korean, I gathered that the Japanese soldiers had slowly tormented a young couple and their families, sometimes by shooting at them and other times by setting them afire. I believe that is what these red flame-ish looking props represent: fire. You can see the anger, bitterness and resentment in the actress’ faces. 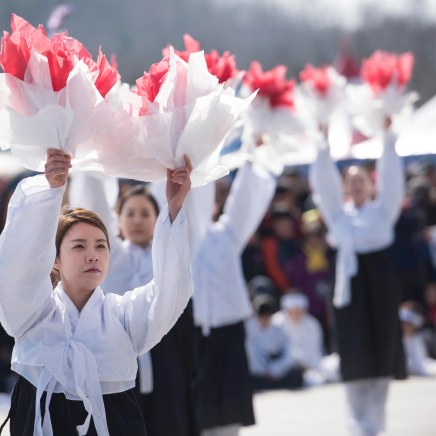 At one point the female lead begs the Japanese soldier firing squad for mercy, crying aloud in anguish.

But all of her crying was in vain.

After this moving account I visited the indoor museum, which as it turns out, was a treasure trove of historical facts and artifacts.

I learned that it was at 2pm in the afternoon that Korean national representatives held the Declaration of Independence ceremony at Taehwagwan restaurant in Chongno in 1919. Students also gathered at Tapgol Park, declaring that Korea was an independent state and Koreans were an autonomous people. They marched along the street shouting “Hurrah for Korea’s Independence!” The ceremony, gathering and march was mirrored across the country.

Because a large majority of Koreans participated in the movement, Japanese imperialism suppressed them brutally, mobilizing their army and police, which resulted in the slaughter of many who took part in the movement. “Though 7,509 Koreans were killed, 15,961 Koreans were wounded, and 46,948 Koreans were imprisoned, our people’s tenacious volition of independence was never daunted” (Independence Hall, 2016).

The defiance of Japanese oppression carried on for years upon devastatingly bloody years.

After the defeat at the Battle of Chingshanli in October of 1920, the Japanese troops retaliated by carrying out a massacre against the Korean communities who helped to organize the independence armies. They burned schools, churches and public buildings.

In Jangam-do, Japanese soldiers locked 33 men in a church and set fire to it, killing them all. The sorrowful wives buried the scorched bodies of their husbands. However, only five days later, the Japanese came back and dug up the bodies, threw them into a pile, poured oil over them, and burned the bodies again.

After years of fighting and bloodshed, Korea finally gained her independence on August 15, 1945. And there I was, 71 years later, celebrating it with the descendants of those who fought so valiantly for it.