Suwon Hwaseong Fortress was constructed by King Jeongjo (reigning 1777-1800) who was the 22nd king of the Joseon Dynasty (1392-1910). King Jeongjo built the Suwon fortress for a number of reasons: filial piety to his father, political strategy to eradicate faction struggles and use of it as a fortress of national defense to the south.

I find the most interesting reason for building the fortress to be the filial piety (Confucian philosophy of respect for one’s father, elders, and ancestors) to his father, Prince Sado-Seja. Before I get started on this horrific historical story, here’s a quick family tree so you can follow along.

So here’s the scoop. King Yeongjo (grandfather to King Jeongjo), wise enough to see the end of his reign approaching, turned over the daily administration of government to his favorite son, Sado-Seja. Although probably a good idea, the king’s court was split by factionalism. Two groups formed, one supporting the king whom they wished would retake his throne, the other group pushing for Sado-Seja to completely take over the rule of Korea. Those supporting the king whispered what were probably untruths in his ear, stating that Sado-Seja was overtaxing the people, participating in horrific adulterous behaviors and even had plans to kill Yeongjo and seize the throne.

The king called for his son to appear in front of him for punishment, to which Sado-Seja dutifully obeyed. Once in his father’s presence, Sado-Seja was stripped of his office, sealed up in a rice chest and left in front of the Seonim Gate in the hot July sun without food or water.

Although it took the prince nine days to die, the chest was opened 21 days later. It is said that the body showed no signs decomposition (of course I don’t believe this), and was strangely cold. Many people took this as a sign from heaven that Sado-Seja was innocent. Although the old king realized his error, it was obviously too late.

When King Yeongjo died, his grandson, Jeongjo, became king. Jeongjo couldn’t stand the being in the original capital in Seoul, given the fate of his father, and so he moved the government to Suwon.

The gates of the fortress suffered though the Japanese Occupation Era (1910-1945), 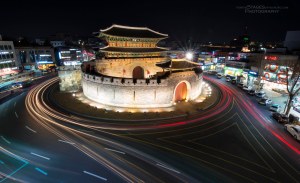 and the Korean War (1950-1953), when many parts of the fortress were destroyed or lost. But, it was during 1975-1979 that most of the reconstruction of these areas were rebuilt or repaired. Here is a photo I took of Paldalmun Gate last month, which is the southern gate. “A plaque of the names of those who helped build the structure are located on the right wall. Surrounding one side is a crescent-shaped wall known as a ongseong. This secondary wall adds protection to the main wall which was often attacked by enemies with logs. The passageway was purposely made wide enough to allow the king’s vehicles and horses to pass through (reference #3).” As you can see, the city has grown around this and the other four gates. When originally built, the walls of the fortress would extend from either side of this gate as they would from the other gates.

The walls of the fortress have remained almost completely intact since first constructed 200 years ago. I have walked the circumference of the entire perimeter wall. It took me half a day to make it all the way around.

The Suwon Hwaseong Fortress was designated as the Historical Remains No. 3 in Korea and was chosen to be registered as a UNESCO World Heritage in December 1997.