In 1851, after the enactment by the United States Congress of a Fugitive Slave Act (the effect of which was to return Africans and African-Americans who had escaped from slavery in the Southern states and were living in the North, back into captivity), the editor of an antislavery periodical asked Harriet Beecher Stowe if she could supply him with a timely story or article. Stowe agreed to write a fictional piece about the lives of several slaves on a Kentucky plantation.* This fictional piece, Uncle Tom’s Cabin, is written about actual people and their lives, although some characters were developed wholly by Stowe, all to illustrate the condition of slavery. The narrative wonderfully explains the 1850s from many different sides of the story. For well-rounded insight into this era, I highly recommend reading this book.

Students in our US History class have been reading Uncle Tom’s Cabin since the beginning of the school year. There intermittent tests on certain chapters ask critical thinking questions such as, “What does Eva’s death mean to you?” and “Why is this text worth reading?” also “There are many important ideas/themes in this book. Name three and explain why they are important.” and finally, “Rather than reading Uncle Tom’s Cabin for sheer pleasure, we are reading this book to understand and appreciate a worldview. According to you, what worldview might that be? Explain.” Below are some responses to these questions from students in our class. There is also a photo gallery below showing some of the writing of the students. So proud of them!

What does Eva’s death mean to you?

Student response: Eva’s death has shown me a new outlook on death. I don’t fear death but there’s something about how Eva feels about death that makes her different. To me, she views death like going to see a loved one (a very special loved one.) “You never saw him,” said St. Claire. ‘That makes no difference,’ said Eva. ‘I believe him, and in a few days I shall see him’ and the young face few fervent, radiant with joy (ch. 26).” I always didn’t like the fact that when you die, you leave loves ones back on earth, but Eva has shown me that those people should not be sad, but joyful you are seeing Jesus. Eva’s faith honestly inspires me. She has great faith but not just that, she truly loves Jesus. If there’s anything to learn from this character, it’s that having the faith of a child, is grater than anything. To love unconditionally like a child and believe like them is exactly what Jesus told us to do. Eva’s death means that through death, we are given life, a gift that’s unimaginably good.

Student response: Eva’s death exemplifies the frailty of man. Man is not God. We die. And yet in our frailty we are given a responsibility to love one another. Eva as a character is not perfect, be she is more perfect than you and I. If someone so perfect can live a short life and still accomplish much, we should follow in those footsteps. Eva’s death is an example. Stowe presents her as a gift. As a child who being little still did much. We should strive likewise in our position as: teachers, students, friends, parents. We should strive to love as she loved, to serve as she served, and to make peace as she made peace. When we follow her example, we are following the ultimate example of Christ! This is what Eva’s death means.

Why is this text worth reading?

Student response: This text is worth reading because honestly, life with slavery wasn’t a pretty thing. Everyone knows this, but isn’t it kind of swept over in history books because no one wants to talk about it? This book takes that ugliness and give it a personal spin. It helps illustrate how human slaves were, though they are desolate, mistreated people. “…for no creature on God’s earth is left more utterly unprotected and desolate that the slave…(ch 29)” To fully understand how a whole race of people felt, you have to see it in a man to man form, otherwise the idea is hard to comprehend. I love the way this book highlights Tom’s faith, and how strong it is, despite his life. “For in that hour, when he had poured his prayer into the father, he had found an answer to quietness and assurance springing up within himself (ch 29).” This text is important because it tells a story that is 100 (sic) years old like it happened yesterday.

Student response: Uncle Tom’s Cabin is worth reading because it shares about slavery and it also talks about the way people were back then. Many white men had slaves who they cared for and others has slaves who they could care less about. Throughout the book you see some hope, especially with Eva and how she tells the people to let go of slavery. When reading the book you find yourself starting to care for the slaves and I think that is good because we need to care for everyone equally, even if there is hate.

Student response: Growing up we would begin to lean more and more about slavery. We would rad facts and events that involved slavery giving us a better understand of what took place. Uncle Tom’s Cabin is different. Instead of facts it gives experience. It shows how gruesome and how terrible some of the slave owners were to their slaves. The reader is able to gain a sense of love between characters that ordinary history textbooks cannot deliver. Harriet Beecher Stowe rings n censorship in Uncle Tom’s Cabin when it comes to the experiences that the African-Americans had to go though. This book is not only a historical masterpiece but an eye opener for the true pain the slaves had to endure.

There are many important ideas/themes in this book. Name three and explain why they are important.

Student response: Hope – Hope is a huge theme in this book, although a book like this you would not expect it. Throughout the book we see the hope from the slaves that they could gain their freedom back. Several times we as readers think “oh, this person will be free.” We have hope for those characters also. Tom hope that some day he can be free from slavery, even if he is a loyal slave. Faith – Faith is one topic that comes up several times. Through this section the one that stood out most to me was when Eva and Topsy were talking and Eva says, “don’t you know Jesus loves all alike?” because she is trying to express to her that yes, people are prejudice, but Jesus doesn’t care, he still loves you. Prejudice/slavery – Of course this is a theme. The whole book is about slavery. But the cool thing is we see both ends of slavery and how it affects both sides of the issue. We see love and hate for slaves.

Student response: Evangelism – This was a huge theme throughout this book so far! Eva lives her life telling others about Jesus and when she’s dying, she desperately tries to get her father to accept Christ. This shows the importance of sharing Christ with others before it’s too late because our time on earth is limited and telling others about God is all that matters. Love – Topsy (a slave girl) has never been loved and is somewhat disobedient because of it. When Eva shows her love and tells her Jesus loves her, her actions charge. This shows how much human beings need love and the transformation that can come from it. Suffering – This book talks a lot about he horrible conditions that slaves went through and how it affected them. When Tom is sold to the warehouse and bought with the little 12 year-old girl, we see how terrible things were for them and it puts compassion in our hearts for them.

Rather than reading Uncle Tom’s Cabin for sheer pleasure, we are reading this book to understand and appreciate a worldview. According to you, what worldview might that be? Explain.

Student response: What is the solution? The solution is for us to, as Tom did, trust in the Lord because He will deliver us. An atheist would say that everyone is on their own in the world and everything we do is, in the end, meaningless and life is terrible, as presented in this book. The suffering in the book goes to show the absence of God from an atheist’s perspective. However, I argue that bad things happen yet God is always in control and we see this demonstrated through Tom. Tom was a good man who worked his hardest for this mater. When he was sold, he trusted the Lord and never tried to fight against the slave trader, even though he was separated from his family. 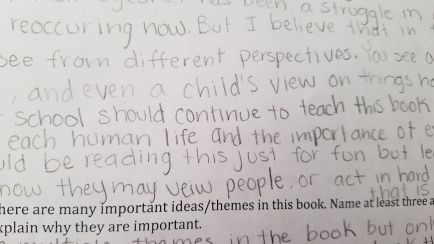 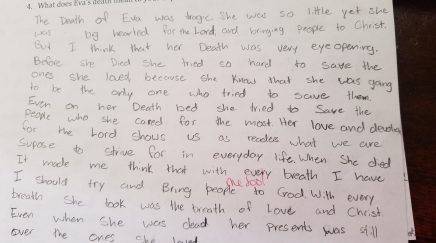 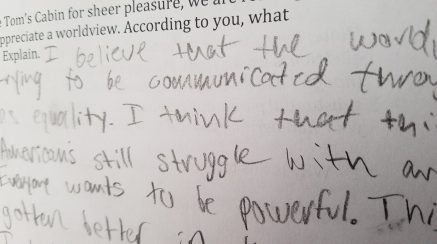 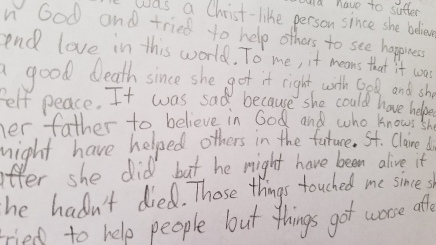 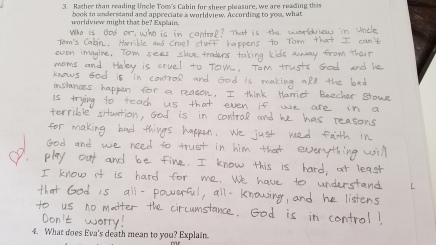 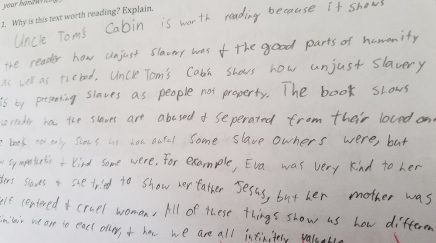 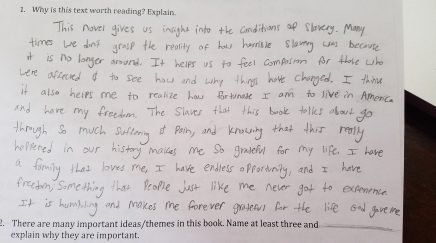 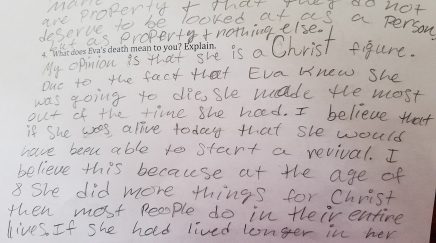